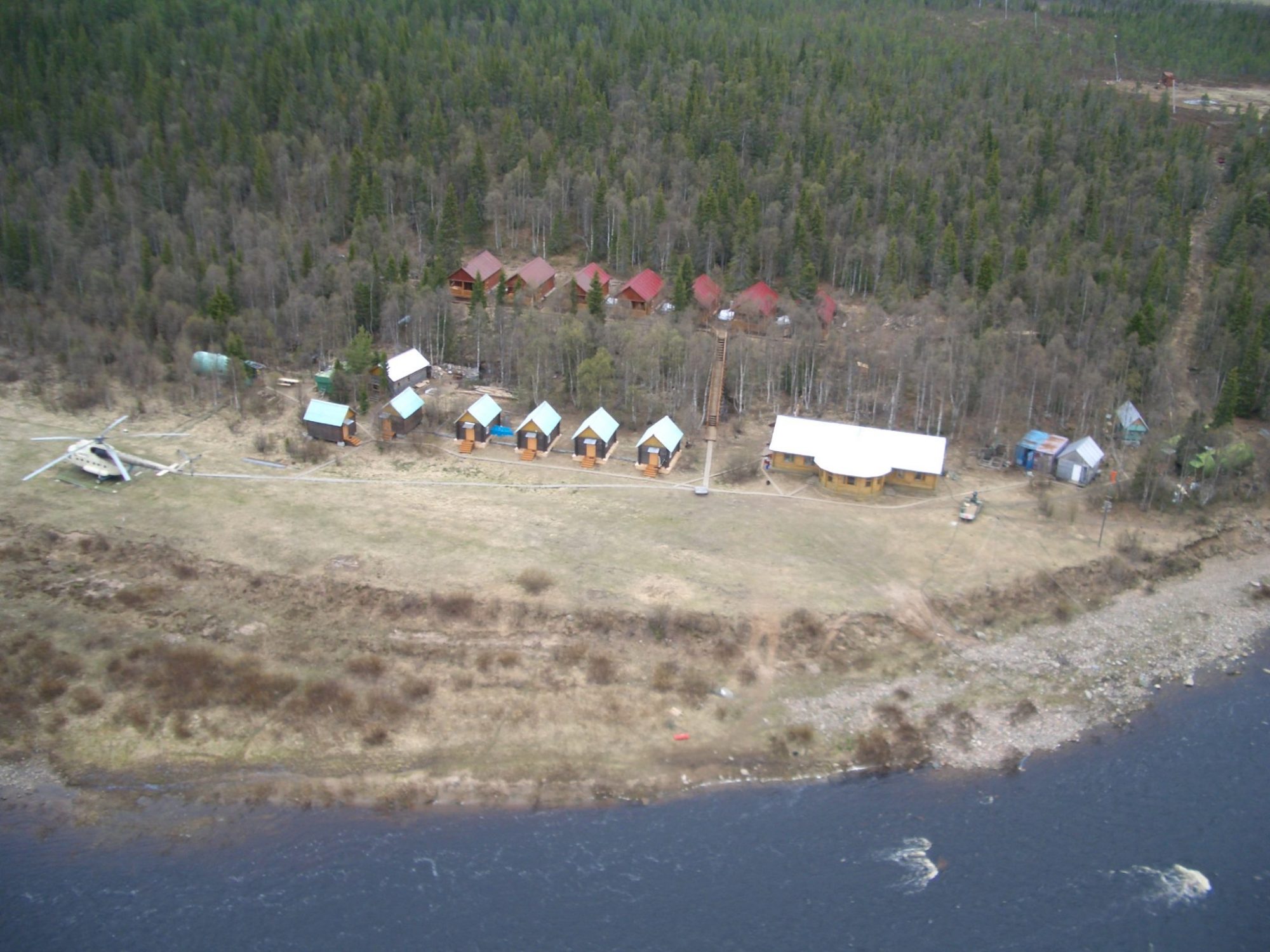 What is the “Burning Bear”?

The story started – and ended – on a single afternoon in May 2002 on the Kola Peninsula in Northern Russia approximately 1.5 miles (downstream – annoyingly) from our Sabachii Base Camp on the Varzuga river system.  It was my 5th, and soon to be – for reasons soon to become clear – final season on the Kola. In the above photo the hut on the far right, at the back, was my home for 5 phenomenal and challenging seasons.

I was managing an Atlantic salmon fishing operation over 200km of the Varzuga river and its tributaries the Pana and the Kitza. Before the start of the season and before the arrival of our first guests I had collected supplies from our Russian partners and had stopped to fish on a small bluff some 2km downstream from camp near the mouth of the White Sea. The river ice had recently broken and, with air and water temperatures now above freezing the taiga and tundra were beginning to show shoots of green life under their blanket of snow and ice.

Fly fishing, even in the hugely rich and pristine waters of the Varzuga, is hypnotic and calming. A true Russian Arctic reverie. And so, even though I saw the bear, I didn’t really care that I could see the bear. It was all genuinely relaxing, and not in a “be cool in retrospect way.” I wasn’t being brave and I wasn’t (trying to be) the Revenant.

I watched the bear for a while, gazing at it meandering along a good 150 yards away and paying little more attention to me than I was to it. There was no cause for worry or concern. Also, our camp was close, the Varzuga village was nearby and the bear was presumably well used to people. I kept on fishing.

It was when I looked back and when I could no longer see the bear that I began – instantly – to care that I couldn’t see the bear. I looked, looked and looked and very shortly I again saw my bear. My relief was short lived though as it was coming towards me really quite quickly and seemed to be keen to get much closer.

Perhaps understandably I was less keen on this pending union and legged it in the opposite direction –  into the Varzuga river. Wearing waders while fishing is an excellent idea, unless you are in water that is much deeper than you are tall of course. I immediately went under water though equally immediately came back up and, in my mind’s eye, shot penguin-like out of the water and onto my boat, a 20 foot open metal skiff with a simple, single outboard impellor.

Sitting perched, in 1 degree temperatures, in the snow on a metal boat, having been submerged in a freezing river with 50 litres of river water and ice in chest waders is not pleasant at all – bear or no bear.

The silver lining was that there was, by now, no bear. I never did see it again and can only guess that it was as unimpressed by my rapid “exit, stage left” as I was relieved. The worst – the burning part of the burning bear – was however yet to come.

I had picked up some supplies for the fishing season and I was managing a team of 40 Russians and our own Cooks and Camp Managers and, in and amongst our motley crew, there were some smokers, myself included at that time. It was therefore an insult to the almost-bear-injury that my only matches had gone into the water with my waders and that there was quite literally no way at all that I was ever going to succeed to light even one of the 50,000 cigarettes that I had just collected to distribute for the season. Given my circumstances at the time this was “disappointing.”

They say that bad things often come in threes and so, obviously, the outboard motor wouldn’t start. If this was the third (1: bear, 2: matches, 3: engine) then surely being downstream of camp constitutes a fair fourth.

It was a long row back to Sabachii and I did not arrive looking my best. This then completes the name; I do not remember ever having been so cold – indeed I hadn’t even conceived of that level of cold before – and, during my imaginations as to what could be more dangerous than a bear I came to the conclusion that the only thing more dangerous than a bear might well be a burning bear. Perhaps my sodden matches were playing on my frustration, perhaps it was the alliteration of chattering teeth angrily muttering b-b-b-b-bear, definitely it was the cold talking.

Our Burning Bear sauce is freshly made to our own recipe at each of our Arlo’s restaurants every day of the week using zingy chilli and smoky background spicing. It is always fresh – never frozen. It is – as it should be – hot, but it is not “show-off” hot or hot-for-the-sake-of-hot. It is good hot, wake you up a little bit hot.

We love it, and we hope you will too.